Day 3- Improving Legacy Software: How Much Better Does It Have to Be? 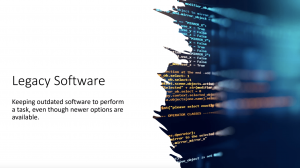 — Hello, and welcome to my talk at improving legacy software
— Our product teams often ask if users will like a design change to an existing piece of software
— This talk outlines a set of ideas on how to get some answers

— There’s the notion of Legacy Habits, with habits formed around software use that makes people be as efficient as possible at doing the work

— There are two important ideas:
— Let’s consider products you work on: what are the most ingrained habit paths 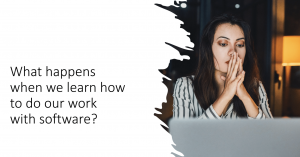 — But what happens when we learn how to do our work with software? 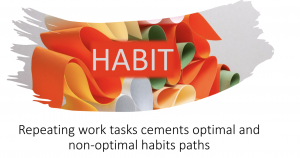 — As people cement habit paths, they are difficult to unravel
— Many paths are ingrained across every day tasks

— But companies must innovate and change, in various ways:

— We get at a high-level that companies need to do these things, but along the way their efforts can collide with broken, but established, habit paths
— So let’s respect legacy habits 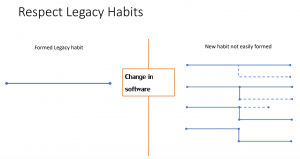 — What can happen if legacy habits are not respected?
— But let’s get concrete about what this means 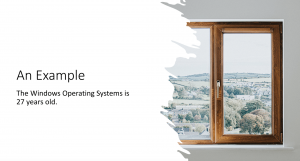 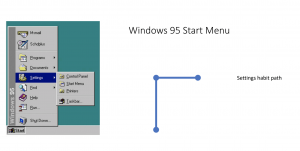 — For example, let’s consider the setting habit path, which requires a user to click on a start button,  seeing a control panel, and clicking on settings
— Windows 95, had a simple habit path line of accessing these settings

— The same path existed for Windows 98 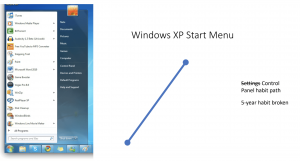 — Then came Windows XP, which had the same entrance to the start menu, but no label for settings, which broke a five year habit path 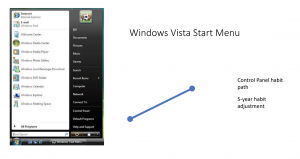 — Windows 8.1 had to the fix start menu problem by including the start button on bottom-left, and having two habit paths from start to settings

— The Windows 10 software habit path leveraged prior habit paths, but broke with Windows 8

— Windows 11, broke with the Windows 10 path, by introducing a new version of the screen. And people had to grab onto a new path 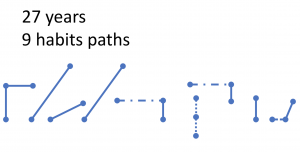 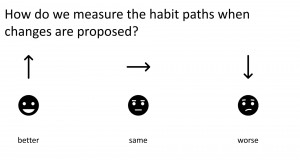 — How to measure the proposed changes: 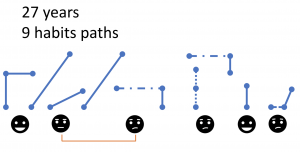 — We didn’t know which habits were formed by users over the years, so empirically it’s hard to see changes in user sentiment
— So let’s guess the changed and expected mood
— But how could we have detected this habit path? 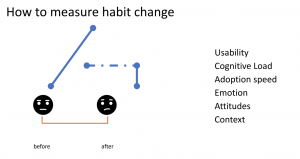 — How could we have measured it?
— The key is to do this before/after analysis with whatever measure you need 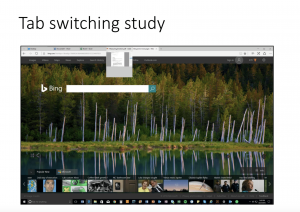 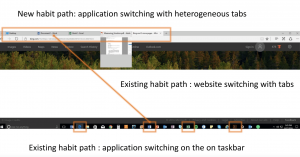 — We understood people had used task bar to move to new applications
— Could the habit be broken to switch from tasks to tab bar? Could people replace their old habit path with a new one? 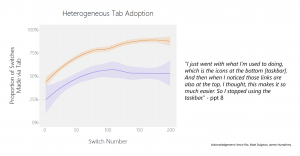 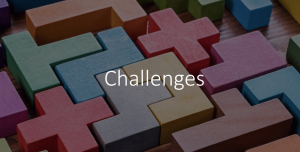 — First, we need a big sample to capture new/old habit paths
— Second, we know that screening right people for studies is important, and grasping existing user paths
— Third, we must grasp the pain from releasing old habit and adopting a new one
— Fourth, context is king, and there is a huge difference between a simulated environment versus the real world.
— Fifth, pathing telemetry should be added to the prototype to capture switching paths, and on software for habit paths
— Sixth, prototypes are key for capturing paths and differences between one and another 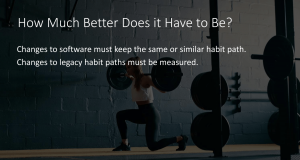 —Let’s design to respect habit paths, measure changes to capture habit paths, and monitor these changes before a new feature is released to the world 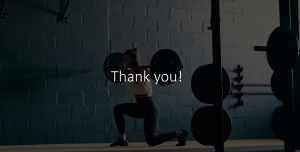 Q&A
—> I think we should track these changes in habit paths as an industry
—> In terms of what we know about habit paths as an industry, I think we should try to figure out how to unify experiences across an industry
—> You should know the uptake of different updates, and weighing it based on the population
—> This is a hard one, as we ran into this as we had version of Windows operating on mobile, with desktop, holo-lens
—> It’s always the biggest thing for UXR to be upstream
—> If not a possibility, figure out culture change and interactive studies
—> It would be great if more wiki like, as it is easily more consumable and searchable for most folks
—> There are assumptions of everyone easily grasping an affordance, but this is not universally true
—> It’s a better case to measure, as you can know the people and how they use the software to grasp what gets broken
—> That challenge is hard, especially with acquiring new users from a different system